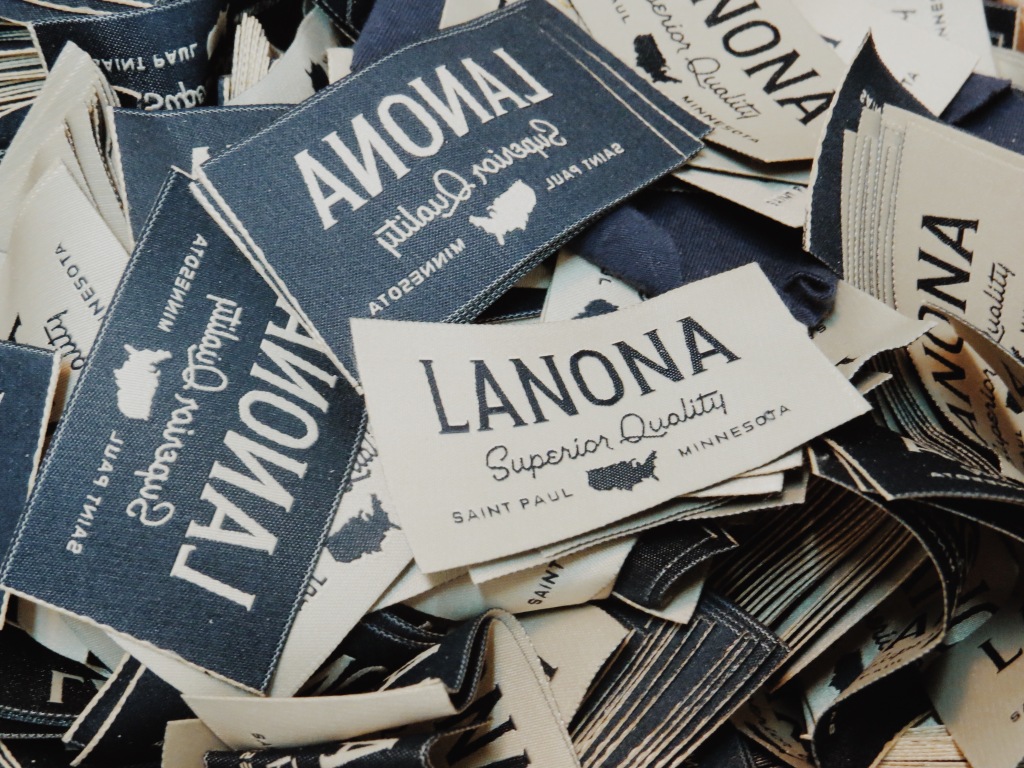 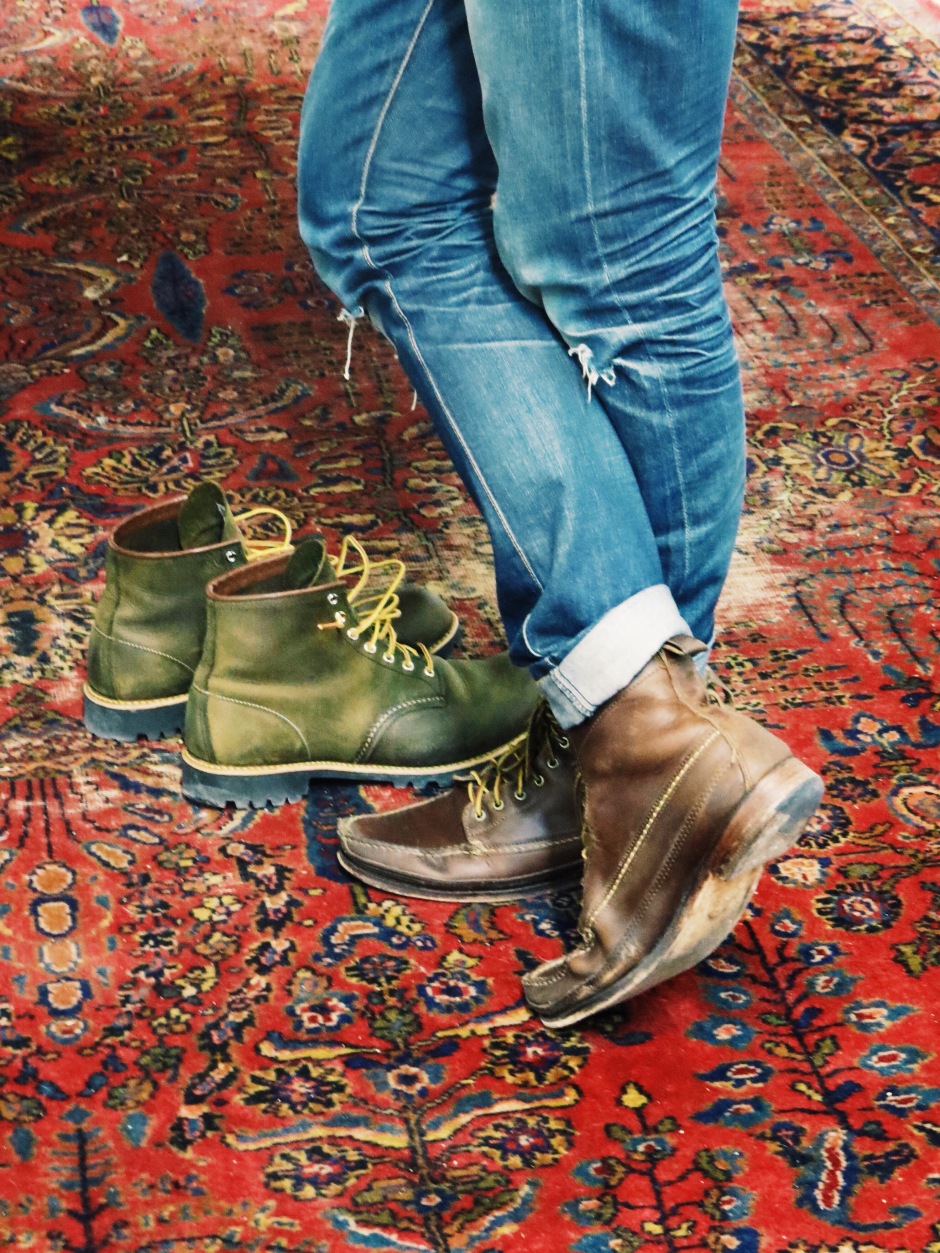 My late farther had a handful of interns that he coached at some point during his career, but not one of them ever reached the mythical pedestal onto which he placed his favorite, Ben Ransom.

Ben, as described by my father about nine years ago, was an intelligent and formidable whipper-snapper of a hipster whose peerless brand of droll humor was unmatched, and whose dogged resourcefulness would have made him a bit scary to most people if he hadn’t have been so damn nice.

When working with my father, Ben had a car which he had jerry-rigged to run on restaurant-grade canola oil, collected and resuscitated for automobile use from local Saint Paul greasy spoons by Ben himself. In addition to maintaining this very ecological yet somewhat inconvenient vehicle, Ben also moonlighted as small business owner to a company of his own design called Analog Hero.

Analog Hero was founded on the principal that older is often better when it comes to electronic ephemera. And thus, Ben would collect all sorts of plasticine relics and re-purpose them for use in the early two-thousands.

Ben’s inventory for Analog Hero included vintage Poloraid cameras and derpy IBM calculators from the 1980’s, but perhaps his most coveted items were refurbished renditions of early mobile phones.These dinosaur phones, hailing from anywhere between 1981 to 1989, are what we now, in 2014, refer to as Brick Phones and every Analog Hero Brick Phone had been lovingly refurbished so as to allow for the inclusion of a SIM card, making the phone not only fully functional for daily use, but also one-hundred-and-twenty percent hilarious when pulled out of a – what? A pocket? Nothing can really ‘fit’ a brick phone, other than a briefcase or large purse, and so one must resort to conceal and carry laws, or just flat-out flaunt the oversized device.

And so it was for the sole purpose of purchasing one of these brick phones from Ben’s small business that Shaquille O’Neil had called Ben that day. My father found this weird triangle of Brick Phone, Ex-Basketball Player, and Ben both bizarre and gratifying. I think it was Shaq’s interest in Ben’s resourceful invention that truly reinforced my Dad’s belief that Ben was perhaps the best intern — and best person– EVER.

Over time I sort of forgot about Ben Ransom, as I had never met him, even though stories of his escapades and creative efforts had managed to go down in Huber Family Lore. My father himself was one of the last curmudgeons to finally adopt the use of a smartphone and when he did trade up for a Blackberry, he jokingly donated his outdated Nokia to none other than Ben. Perhaps one day it would end up in the hands of a famous basketball player or b-list rapper; two interest groups for whom Ben’s brick phones seemed to hold special appeal.

Right before Thanksgiving I stumbled across the website of a new shoe-making start-up based in Saint Paul. I liked their vibe. The design was solid and the product looked to be designed and manufactured with integrity. I sent an email to the owner, Ben; asking if he would be down to meet for a coffee and to discuss a potential feature on the blog and received a response the next day. Ben said he would love to meet, and then mentioned working with a fellow Huber awhile back. Was I perhaps related to the Great Howard?

I remembered suddenly the veggie car, the brick phone, the Shaq voicemail my father had been weirdly good at reciting verbatim, (even long after the order had been shipped.) The world suddenly felt very small and very wonderful. I responded that Howard had been my father, and that if he was free to meet I could do Friday. 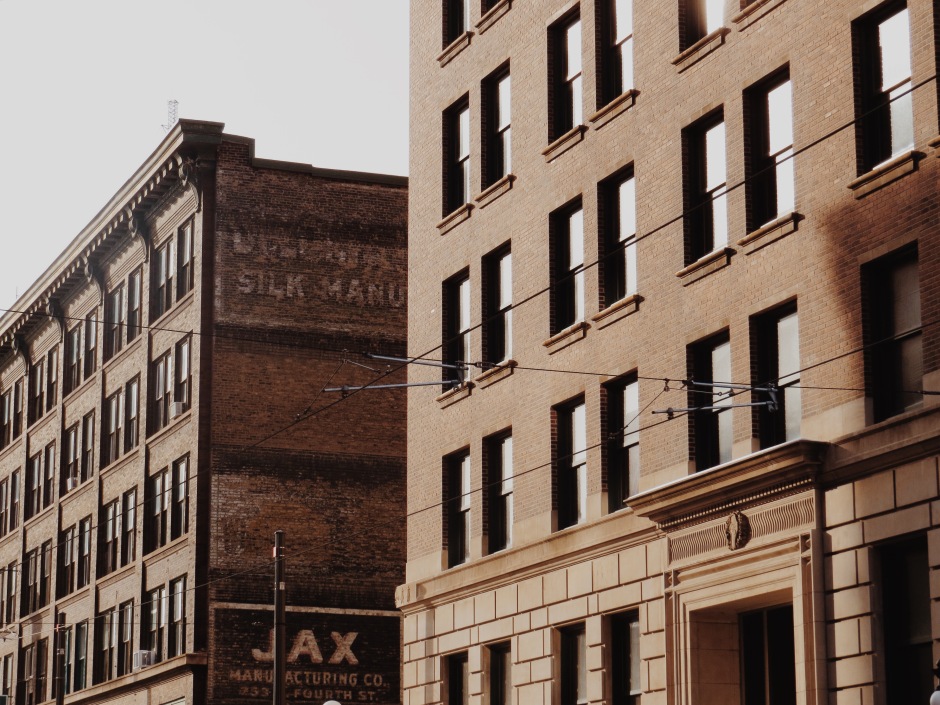 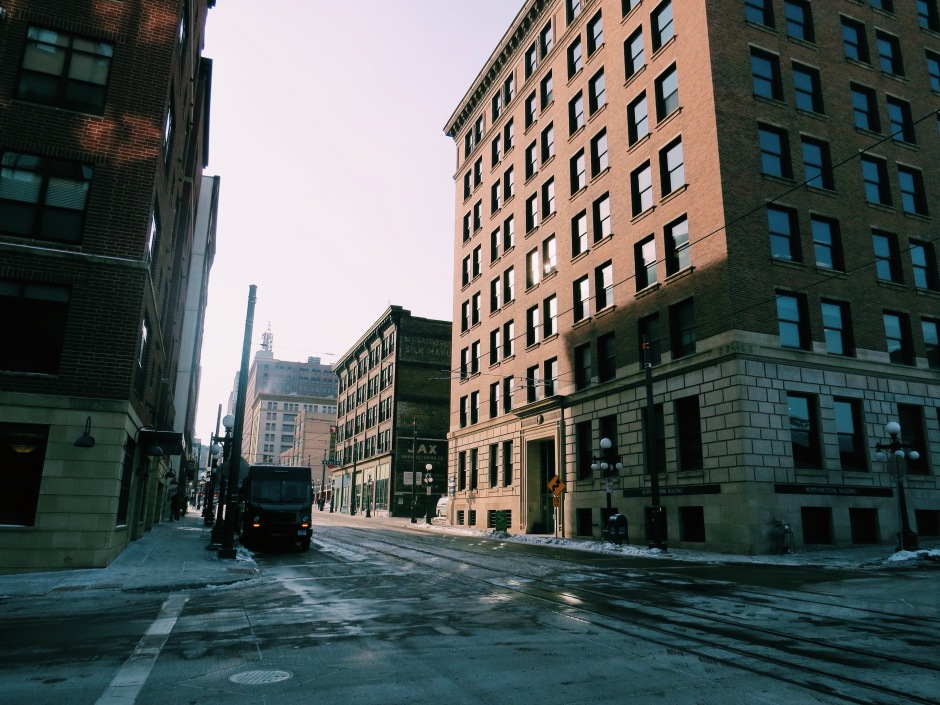 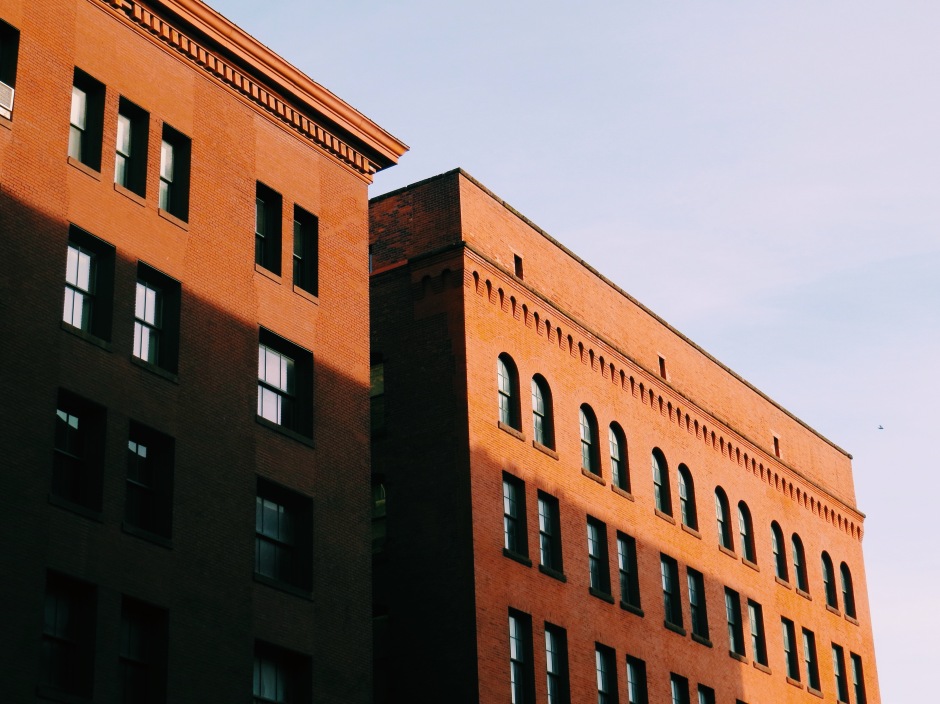 The Lanona Shoe studio is located in Lowertown Saint Paul, a part of the city very much tied to Minnesota’s history as an epicenter of industry during the late 1880’s through the 1920’s. Lowertown, previously known as the lower landing to the Mississippi River, was a block of warehouses, shipping centers, stockyards, and railroad buildings that served the entire upper Midwest. A large amount of these meat-packing plants and wholesale shipping centers still remain, and not only are they beautiful — for many were designed by famed Midwestern architects like Cass Gilbert and Clarence Johnston — but they are also fully operational. Many are now private artist residences and working studios.

It was here that I met Ben, on floor two of 308 Prince street, with a pile of Lanona moccasins boxed and ready to be shipped on the floor, a black road bike leaning casually against the right wall, and two old last-stitching machines on loan from a local manufacturing facility for one dollar a year to the left. In the back, a little wooden desk onto which an old typewriter and a handful of business cards rested, a couple boxes with vintage polaroid cameras — leftovers from Ben’s Analog Hero days — piled in the corner, and a crowded work bench near the arched windows where the mixing and pouring of Lanona’s signature soles took place. In the center of it all a large work table and a fabulous old rug.

“I knew you were coming over so I tried to clean up a little bit,” Ben said. “I even polished up my boots!”   Ben walked me around the studio. He pointed out the newest designs they were working on. Beginning with the moccasin, a Minnesota staple, Ben had also moved on to develop a new design, a sort of boat shoe meets eight-inch wedge-sole work boot. One model in particular was made with a handsome green Chromexcel upper. 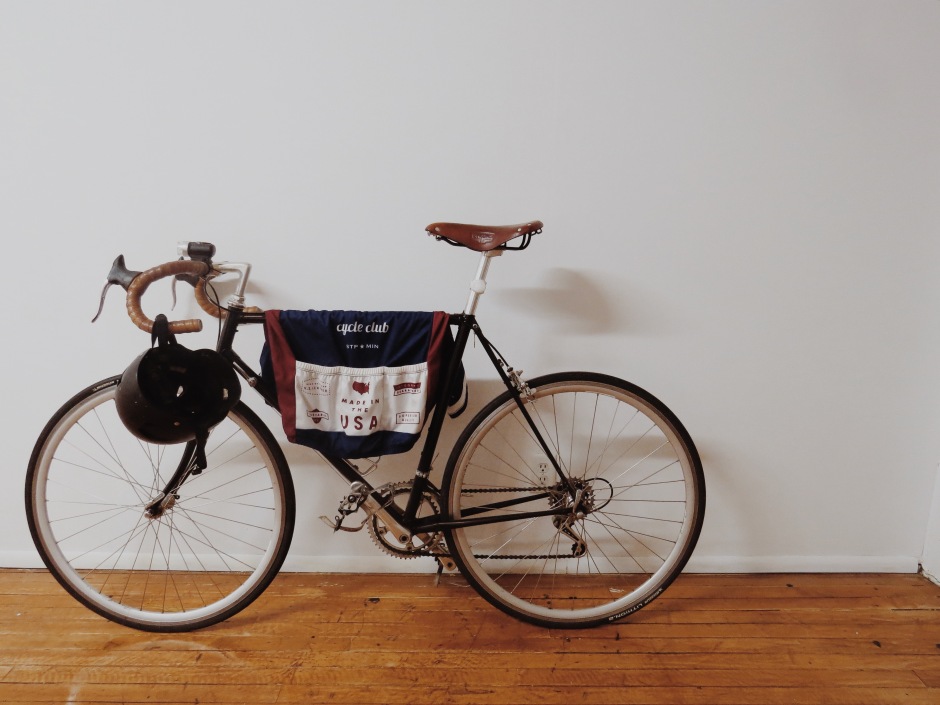 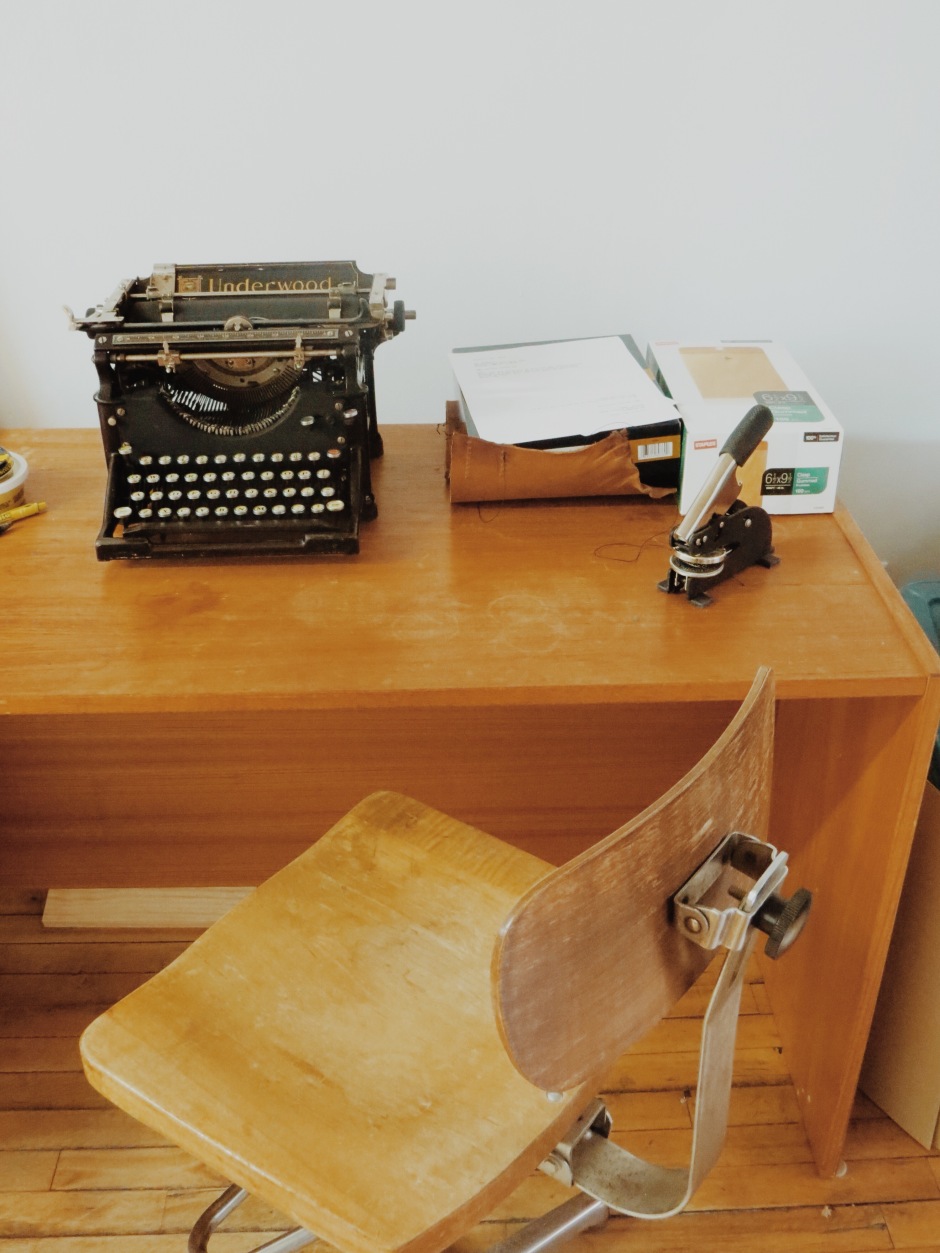 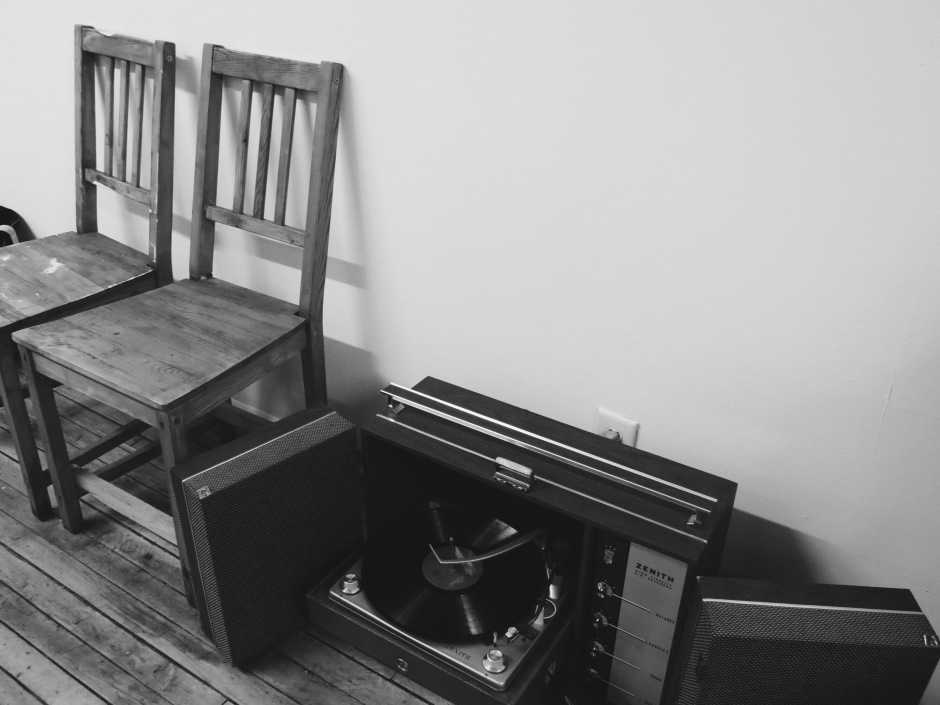 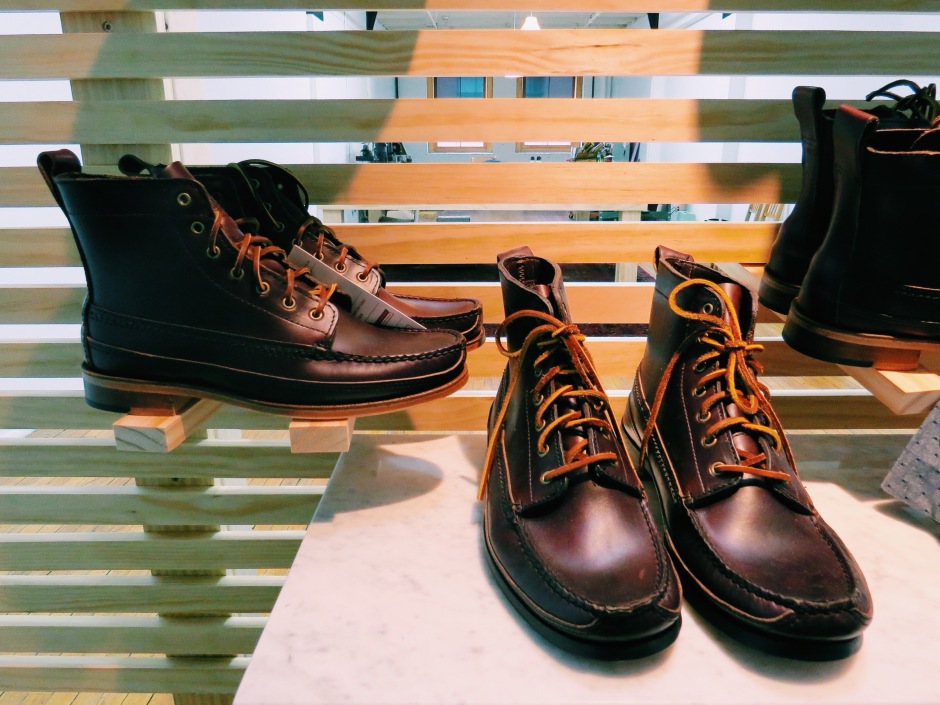 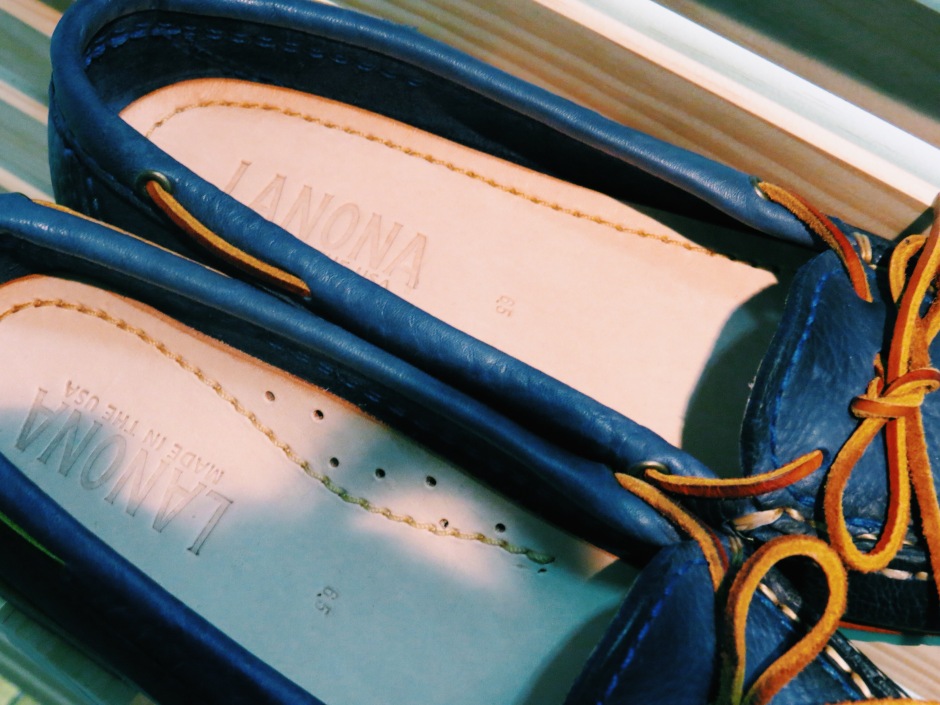 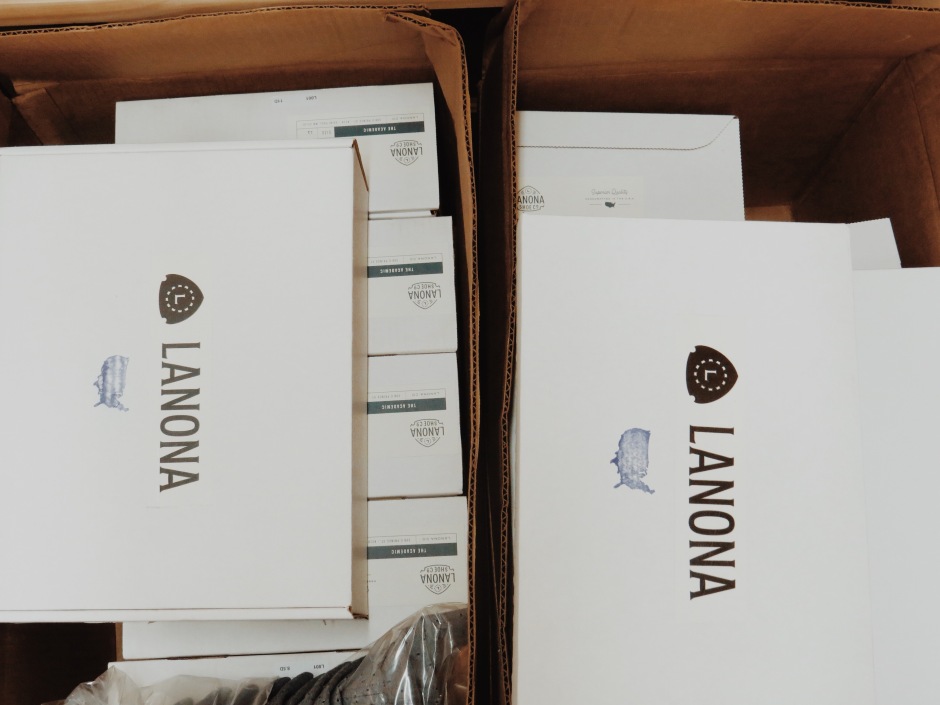 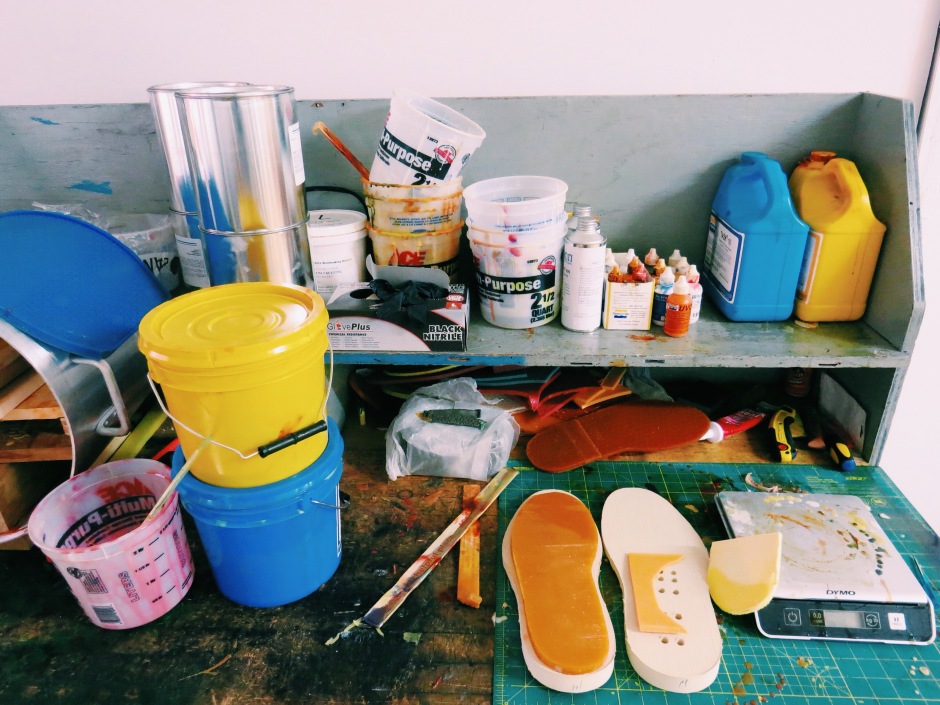 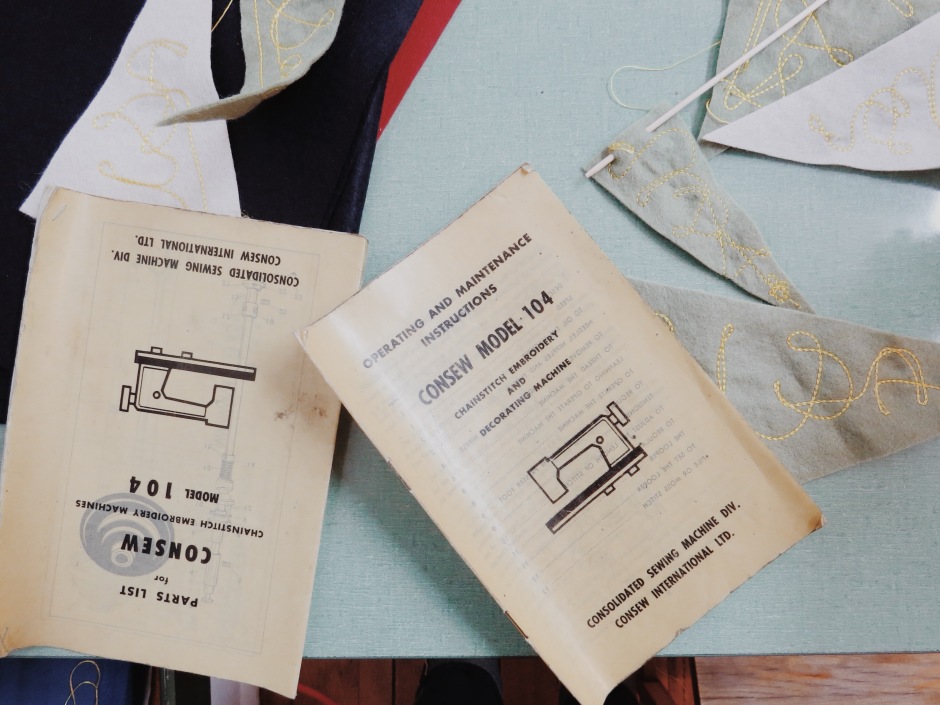 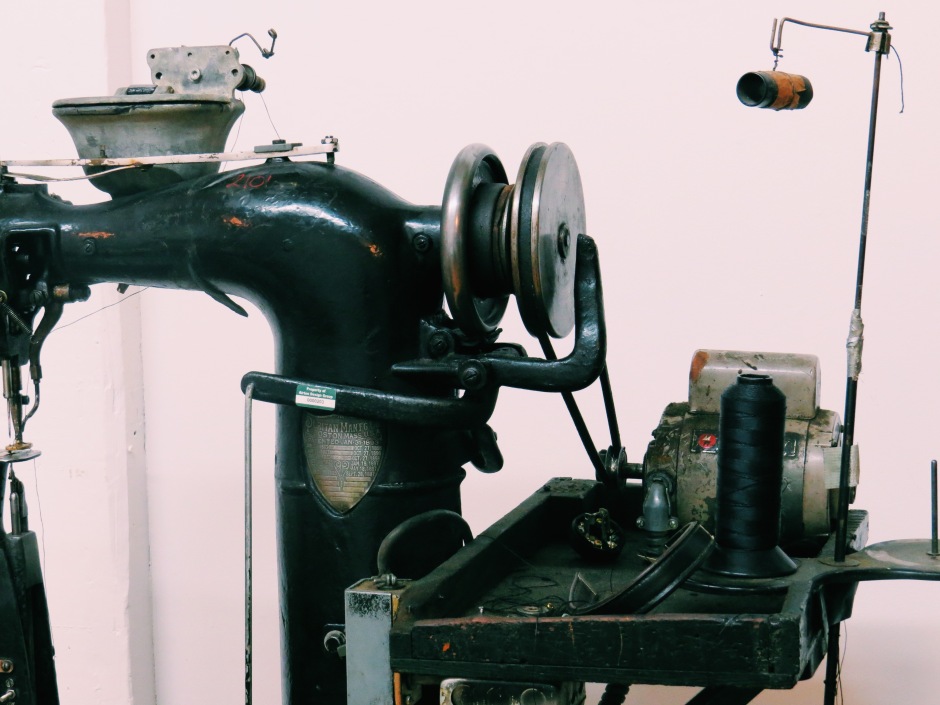 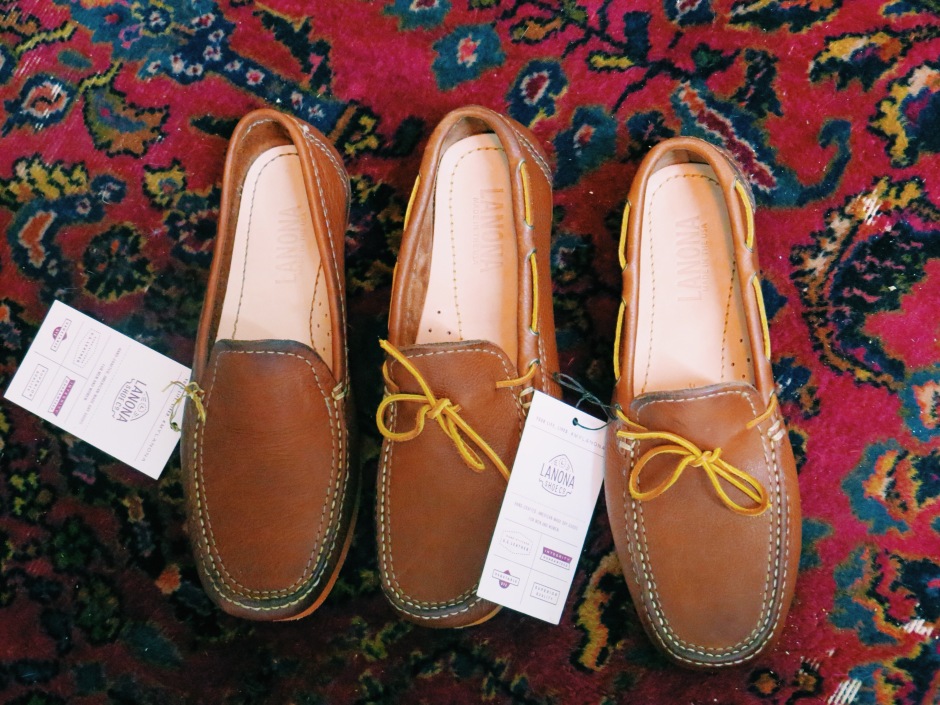 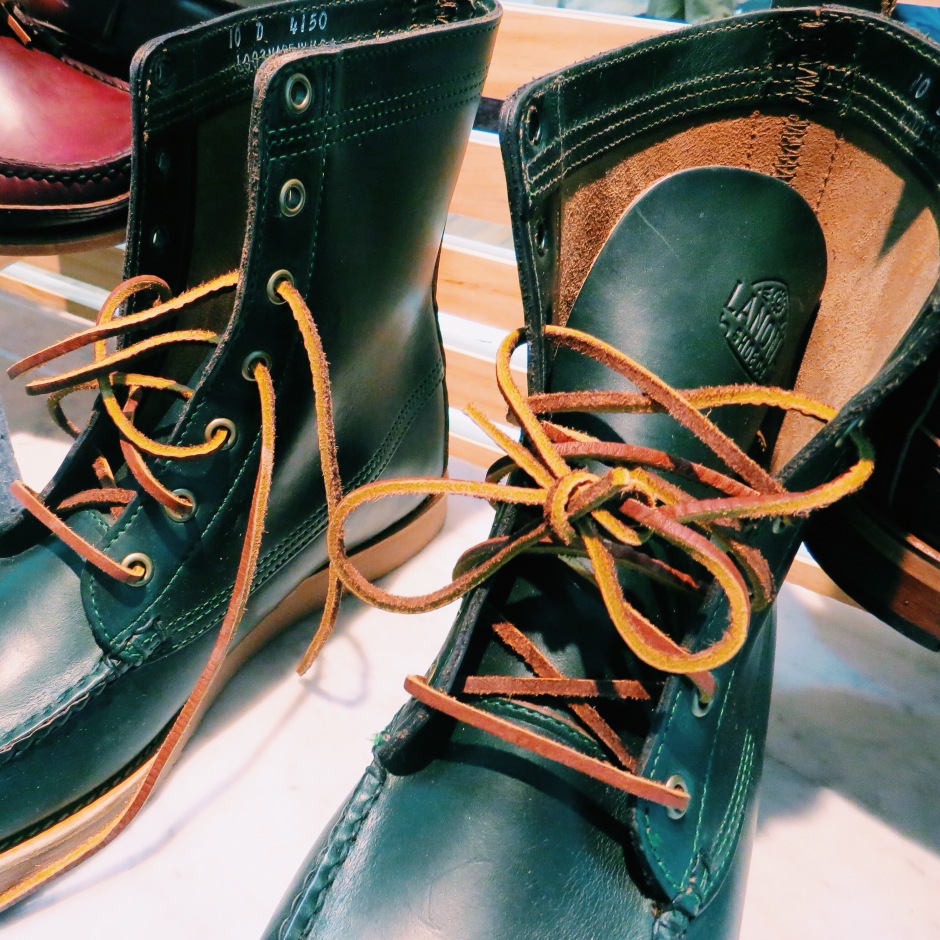 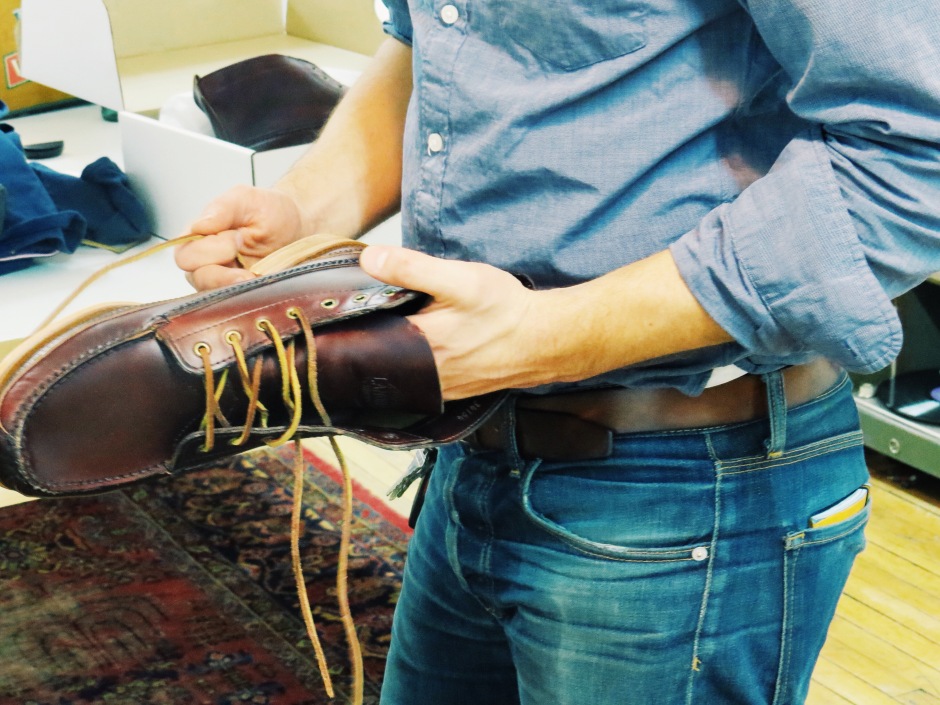 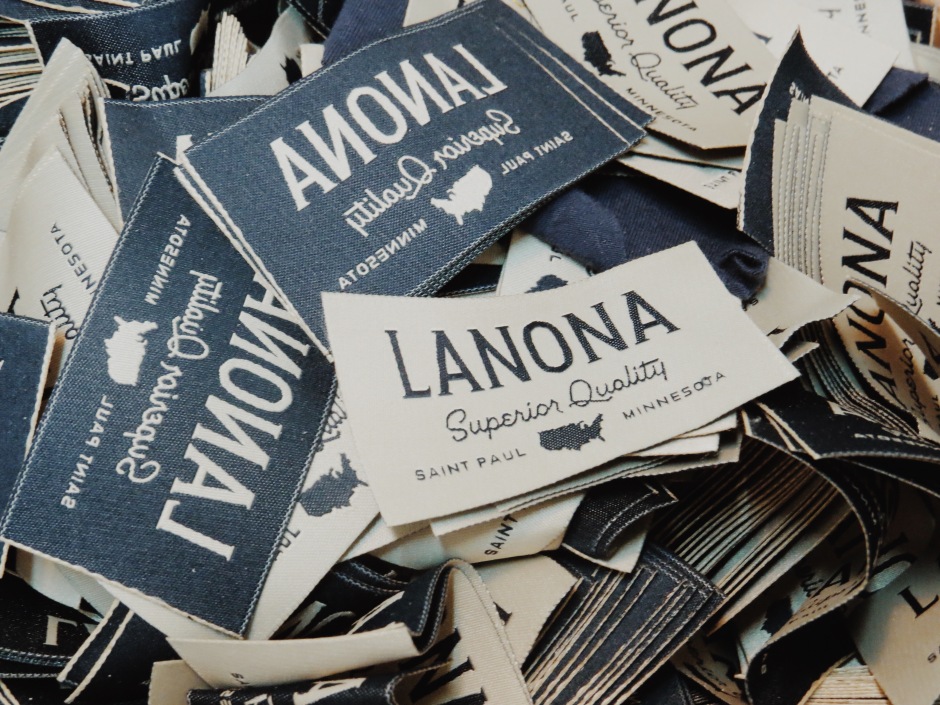 Later during our visit, Ben sat down at his chain-stitching machine and picked up some pieces of felt onto which he had been practicing. The machine had been purchased from a guy out in Orono, and was previously used to embroider jerseys and varsity jackets with the signature wavy looped script and evocative mascots and symbols of high school sports teams. Ben had driven out to purchase the machine, only to be met by an owner who refused to part with it unless he could see that Ben knew how to operate it — no matter how crudely. And so Ben, who had never really used a chain stitch sewing machine before, hunkered down in a cold garage in Orono Minnesota and watched as the old ex-jersey embroiderer spun fabric underneath the heavy needle whilst simultaneously cranking the machine’s wheel for hours. Ben eventually tried his hand at threading the machine and made a few passes stitching himself, until the man was sufficiently convinced he had taught the boy enough and pocketed Ben’s four-hundred dollars. 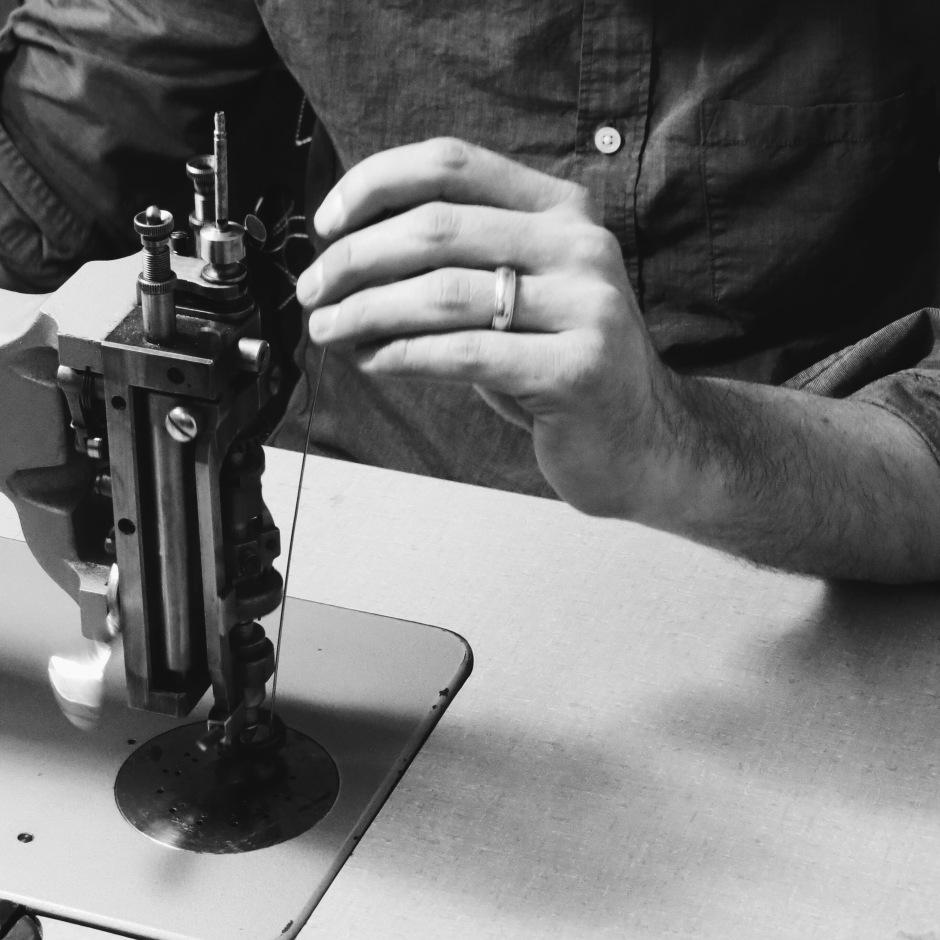 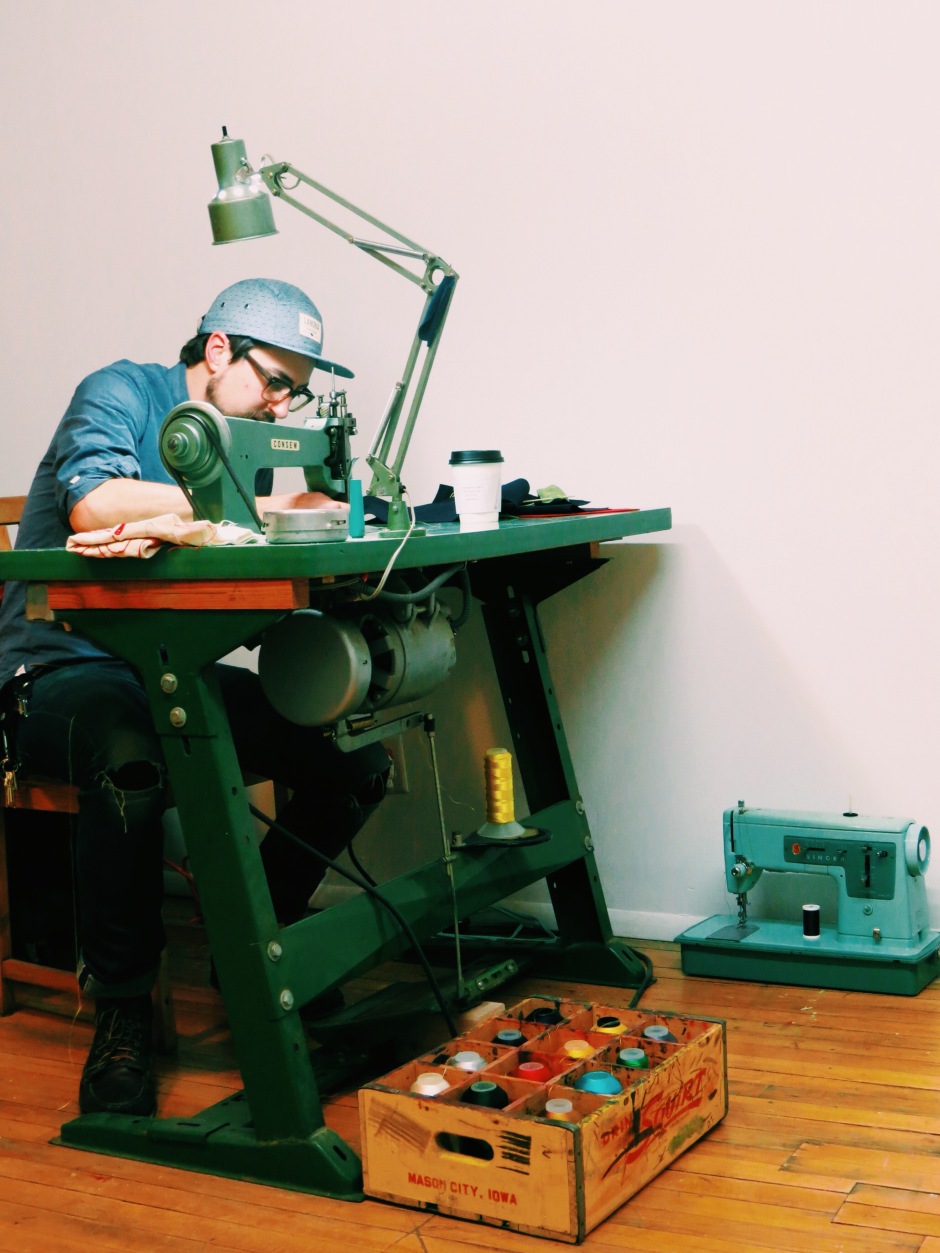 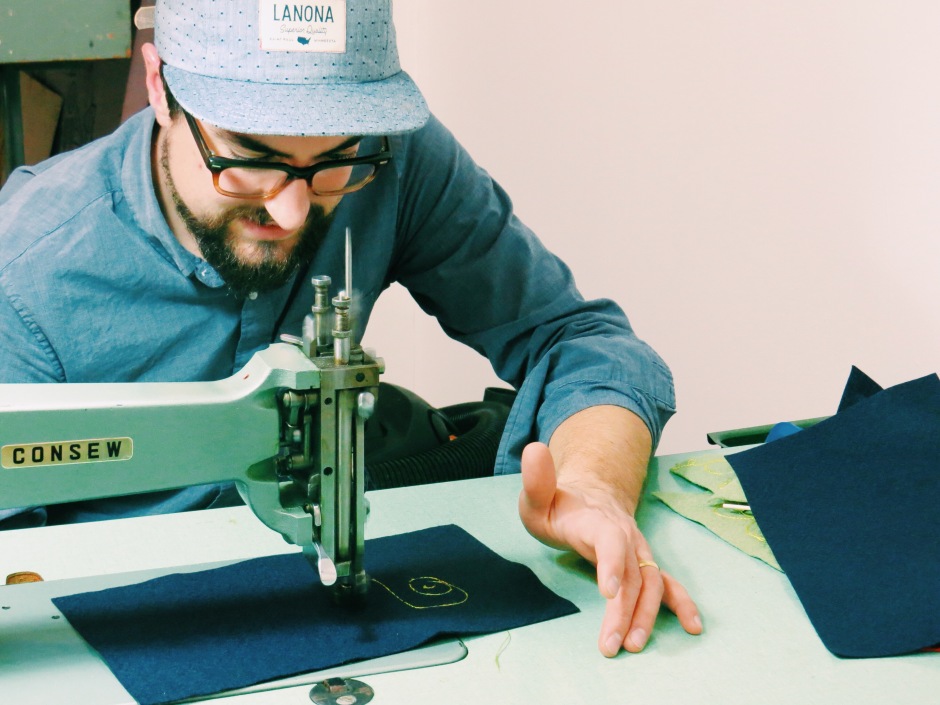 While Ben was chatting and working to stitch a loopy and playful ‘USA’ moniker atop a piece of felt, I noticed another sewing machine, this one boxed up and put away near his feet.

“Is that one yours too?”

“Yeah. It was actually the first sewing machine I ever made anything on. One weekend my wife —who was actually still my girlfriend at the time — was away for the weekend at a work conference, and I just decided that I was going to make her a dress. I had never sewed anything before, but I just picked out some fabric and sat down and figured it out. It was this huge project that totally consumed me for the entire weekend but it actually worked out. She still has that dress, and wears it.”

“So you went and picked out a pattern and everything?”

“Oh no, I just took one of her favorite dresses, one that fit her really well, visually took it apart, looked at how it was constructed, and copied it.”

It was at that moment that I understood why my Dad had liked Ben so much — not just because of the funny, hipster trappings of an inconvenient yet politically-correct mode of transportation and a very specific and smart cache of interests — but because of that story. An individual who picks up a task — no matter how daunting, tedious, or unknown — and decides that he will learn it, and not only learn it, but humbly master it — this is rare to find in an individual, and when found, it sticks out like a desert Sotol plant in the middle of a cold Midwestern prairie. Rare, and worthy of exalting.
+Lanona Co.

Begin typing your search above and press return to search. Press Esc to cancel.